Revocation of Contract: Meaning and Modes- Our Legal World 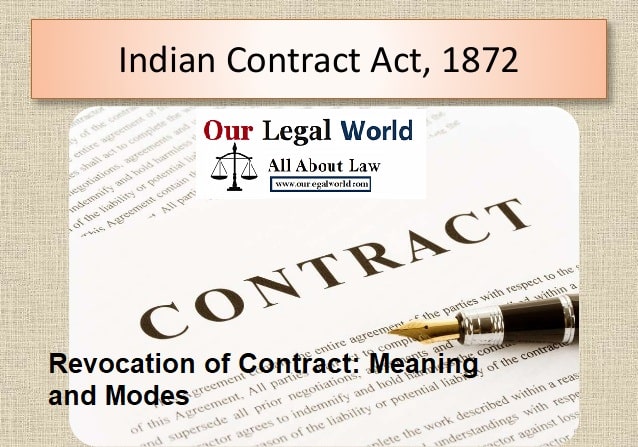 Revocation means “cancellation” and it is a type of remedy for buyers when the buyer accepts a nonconforming good from the seller.

Section 6 : Revocation how made i.e. this section of the Indian Contract Act, 1872 provides various modes of revocation which are as follows:

In this case, revocation has to be made before the acceptance. The communication of revocation to be effective must reach the offeree before he mails  his acceptance  and makes it out of his power. A revocation is effective only when it is brought to the mind of the person  to whom the offer is made[2].

In Ramlalsao Gupta v. M.E.R. Malak[3], unfortunately the letter of revocation was reached at  wrong address and earlier it was being sent by fax. The court held that the same to be of no effect.

In the case of Henthorn v. Fraser[4], the defendant handed to the plaintiff  a detailed  note for the sale of the property at 750 euros with the condition that within fourteen days the acceptance should  be conveyed to the defendant.  Meanwhile that particular offer was considered by another buyer and due to this, next day defendant informed the plaintiff about the withdrawal of the offer and this note reached the plaintiff after 5 pm but by that time plaintiff already responed. The acceptance for the same did not reach to the defendant until the next morning. The court held that the offer was valid and an order for specific performance made for 750 euros to purchase the property. The postal rule in Adam v. Lindsell would apply, which stated that it would  be reasonable  for acceptance of an offer to take place by post. However, this rule would not apply to the revocation of an offer. Post was a way of communicating offer acceptance, but the acceptance itself is completed as soon as it is posted. This was reasonable to expect since both parties lived in different towns[5].

In Alfred Schonlank & Anr.  V. Muthunayana Chetti[6], the defendant offered the plaintiff a sale of indigo proposal  and also told him that within eight days he can reply to the proposal. The defendant revoked the offer on the fourth day on the other hand plaintiff on the fifth day accepted the offer. The court held that in case there is no consideration for the promise to keep offer open for a certain time then its nothing but a bare promise only and at the same time these acceptance was of no use in the eyes of laws.

Where an offer says that it shall remain open for acceptance up to a certain date, it has to be accepted within that date. It has been suggested by the Calcutta High Court that in such a case it is enough if the acceptor has “posted the acceptance before the stipulated time”, even if it reaches the offerer after the stipulated date[7].

Where no time is specified within which the offer should be accepted it is a settled principle that the offer must be accepted within a reasonable time[9].

3). By failure to accept condition precedent

Where some preconditions are there for offer before the acceptance is made, it lapses if acceptance is made without fulfillment of the particular condition precedent. In the case of State of West Bengal v. Mahendra Chandra Das[10], a salt lake was offered by way of lease with the condition that on deposit of a sum of money withn a specified  period but the defendant even after the expiration of the stipulated time didn’t deposit the sum of money. The court held that this entailed cancellation of the allotment.

4). By death or insanity of offerer

An offer lapse on the death or insanity of the offeror, provided that the fact comes to the knowledge of the offeree before he makes his acceptance[11].