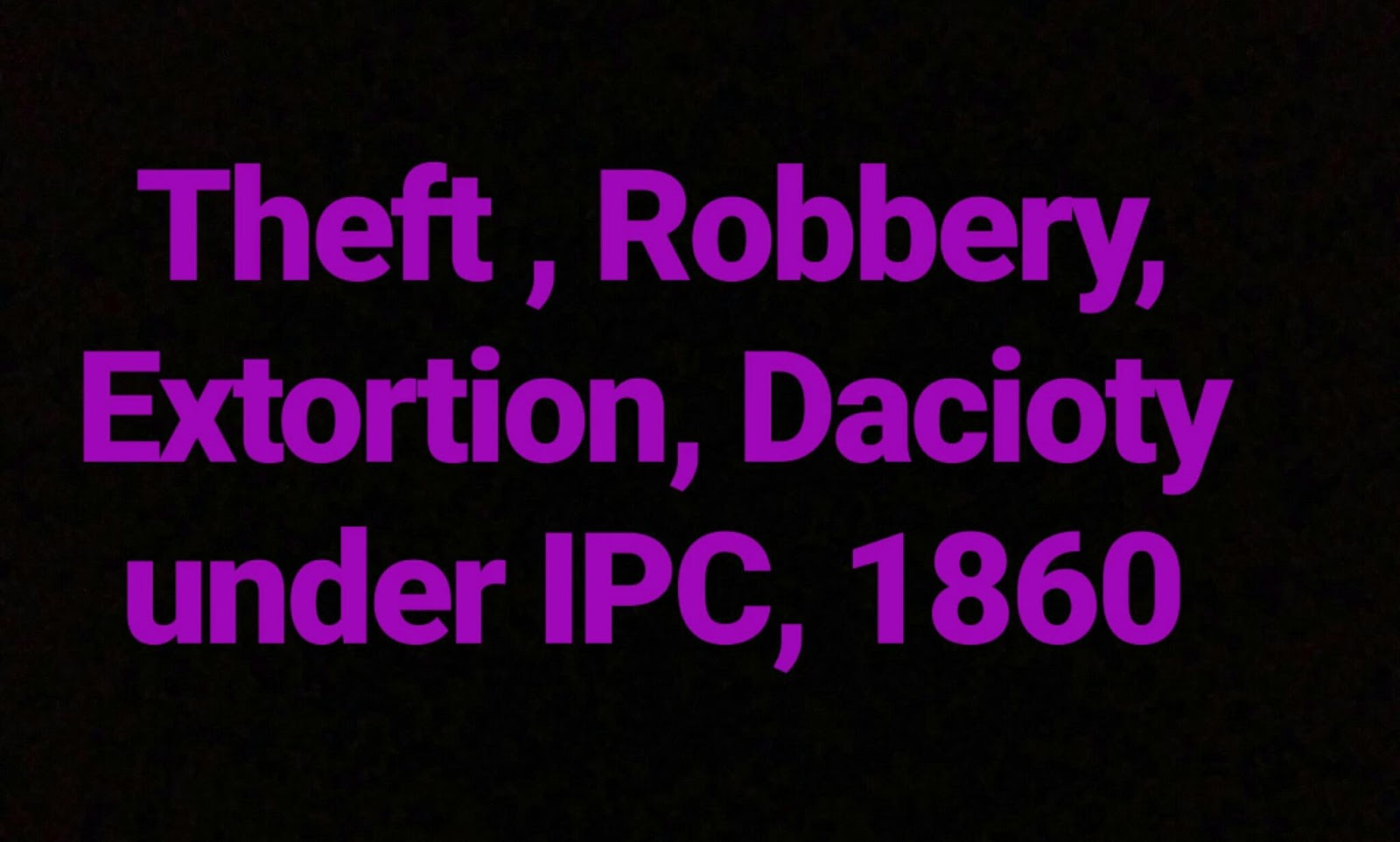 Theft, Robbery, Extortion, Dacoity under Indian Penal Code, 1860
ASHISH PANDAY, student of 2nd year LL.B New law College, BVP Pune
The terms robbery, theft, and even extortion seem very similar and even used interchangeably or apparently identical at times in everyday usage lay. However, in the legal sense and within the ambit on the Indian Penal Code, 1860 these terms are distinct and have been very clearly defined as distinct crimes.

Theft has been defined under Section 378 of IPC, 1860.
Whoever, intending to take dishonestly any moveable property out of the possession of any person without that per­son’s consent, moves that property in order to such taking, is said to commit theft.
Example:  A puts a bait for dogs in his pocket, and thus induces Z’s dog to follow it. Here, if A’s intention be dishonestly to take the dog out of Z’s possession without Z’s consent. A has commit­ted theft as soon as Z’s dog has begun to follow A.
The essentials of theft are:
·        There must be a dishonest intention to take the property.
·        The property must be moveable.
·        The property must be taken out of the possession of another.
·        The property must be taken away without consent.
·        Physical movement of the property is a must; however it is not necessary that it is moved directly.
Punishment for Theft
Whoever commits theft shall be pun­ished with imprisonment of either description for a term which may extend to three years, or with fine, or with both.

Whoever commits extortion shall be punished with imprisonment of either description for a term which may extend to three years, or with fine, or with both.

According to common law, robbery is defined as taking the property of another, with the intent to permanently deprive the person of that property, by means of force or fear; that is, it is a larceny or theft accomplished by an assault.
According to Section 390 of the Indian Penal Code, 1860 “in all robbery there is either theft or extortion.”
When theft is robbery
According to section 390 of IPC: Theft is “robbery” if, in order to the committing of the theft, or in committing the theft, or in carrying away or attempting to carry away property obtained by the theft, the offender, for that end, voluntarily causes or attempts to cause to any person death or hurt or wrongful restraint, or fear of instant death or of instant hurt, or of instant wrongful restraint.
Thus, theft becomes robbery when the following conditions are satisfied;
·When the offender voluntarily causes or attempts to cause:
o    Death, wrongful restraint or hurt or
o    Fear of instant death, instant wrongful restraint or instant hurt.
·And the above act(s) is done
o    While committing the theft
o     To commit the theft
o    While carrying away the property obtained by theft or
o    While attempting to carry away property obtained by theft.
Examples:
1. A holds Z down and fraudulently takes Z’s money and jewels from Z’s clothes without Z’s consent. Here A has committed theft, and in order to the committing of that theft, has voluntarily caused wrongful restraint to Z. A has therefore committed rob­bery.
2. A meets Z and Z’s child on the high road. A takes the child and threatens to fling it down a precipice, unless Z delivers his purse. Z, in consequence delivers his purse. Here A has extorted the purse from Z, by causing Z to be in fear of instant hurt to the child who is there present. A has therefore committed robbery on Z.
When extortion is robbery
According to section 390 of IPC: Extortion is “robbery” if the offend­er, at the time of committing the extortion, is in the presence of the person put in fear, and commits the extortion by putting that person in fear of instant death, of instant hurt, or of instant wrongful restraint to that person or to some other person, and, by so putting in fear, induces the person so put in fear then and there to deliver up the thing extorted.
Essentials :
Ø  Intentionally puts in fear of injury
Ø  To that person or any other person
Ø  Deliver any person
Ø  Any property, valuable security or anything signed or sealed
Example:
A obtains property from Z by saying—“Your child is in the hands of my gang, and will be put to death unless you send us ten thousand rupees”. This is extortion, and punishable as such; but it is not robbery, unless Z is put in fear of the instant death of his child.

According to section 392 of IPC:  Whoever commits robbery shall be punished with rigorous imprisonment for a term which may extend to ten years, and shall also be liable to fine; and, if the robbery be committed on the highway between sunset and sunrise, the imprisonment may be extended to fourteen years.

According to section 384 of IPC: Whoever commits extortion shall be punished with imprisonment of either description for a term which may extend to three years, or with fine, or with both.

According to section 395 of IPC: Whoever commits dacoity shall be punished with [imprisonment for life], or with rigorous imprisonment for a term which may extend to ten years, and shall also be liable to fine.
Share
Facebook
Twitter
WhatsApp
Telegram