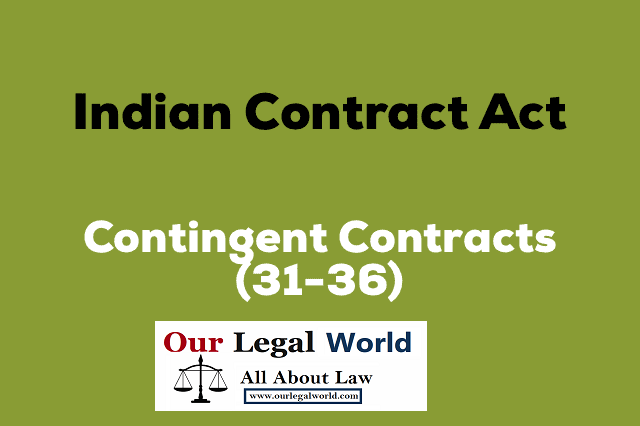 The expression “Contingent Contracts”  is defined under Section 31 of the Indian Contract Act, 1872 as: A ‘contingent contract’ is a contract to do or not to do something, if some event, collateral to such contract, does or does not happen[1].

Illustration: Lily contracts to pay Riya Rs.50,000 if Riya’s house is burnt and get destroyed by the same. In this case it is called as a contingent contract.

Essential elements of a Contingent Contract

1. Performance of the Contract

The performance of the contract must be conditional i.e. condition for which the contract has been entered into must be a future event, and it should be uncertain[2].

This highlights that the contingency has contemplated by the contract must be collateral to the contract. It means that a contract already arisen or a subsisting contract is there, but its performance cannot be demanded unless the contemplated event happens or does not happen[3].

3. Will of the Party

A contract for sale of goods enjoin the condition that the goods would be inspected before despatch was held to be a firm contract. The import of materials agreeable to such a contract was valid[5].

If the event is sure to happen, then the contract is due to be This is not a contingent contract. The event should be uncertain[6].

The six rules for the enforcement of contingent contract are defined under section 32 to 36 of the Indian Contract Act, 1872 are listed below:

1. Where enforcement depends upon happening of an event

Illustration: A makes a contract with B to buy B’s horse if A survives C. This contract cannot be enforced by law unless and until C dies in A’s lifetime[7].

In N. Peddanna Ogeti Balayya v. Kotta V. Srinivasayya Setti Sons[8], it was held that once the event has happened the contingent contract ripens into an absolute one.

2. Where performance depends upon non- happening of an event

In this, naturally the respective parties have to wait till the happening of that particular event becomes impossible and if that event takes place, then in such case the contingent contract is void. This is specified in Section 33 of the Indian Contract Act, 1872.

Illustration: A agrees to pay B a sum of money if a certain shops not return. The ship is sunk. The contract can be enforced when the ship sinks[9].

According to Section 34 of the Indian Contract Act, 1872, when the event for which the parties are waiting is linked with the future conduct of a person, then the event is considered impossible if that person does anything which makes it impossible that he should act in that way in any definite time.

In Pym v. Compbell[10], the plaintiff’s invention was not approved by the engineer, so it was held that there was no concluded contract.

4. Contract contingent on an event happening within the fixed time

If the event does not happen within the fixed time and accordingly the allotted time lapses or if the happening of the event becomes impossible before the fixed time, then in such cases a contract is void as specified in Section 35 of the Indian Contract Act, 1872.

5. Contracts contingent on an event not happening within the fixed time

Where the contract is enforceable if the event has not happened before the expired fixed time and also where it becomes certain that before the time has expired the particular event is not going to be happen. The same is also specified in Section 35 of the Indian Contract Act, 1872.

As per Section 36 of the Indian Contract Act, whether the impossibility of  the particular event is known or not to the respective parties to the agreement at the time when it is made,  if a contingent contract is based on the happening or non-happening of an impossible event, then such a contract is void.